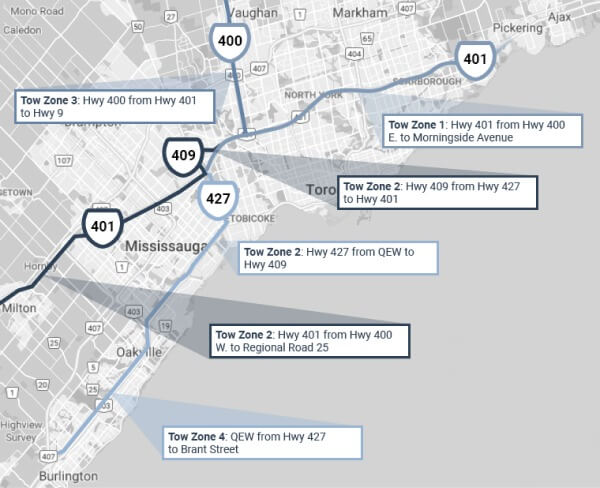 The Ontario government has implemented new regulations for towing in the province, which includes a joint team to address violence and fraud. These new regulations also include a pilot project that restricts towing zones on highways. Beginning from the summer of 2021, four different sections of highways in the Greater Toronto Area (GTA) will be restricted tow zones. According to Caroline Mulroney, the Ontario Transportation Minister, these new tow zones will allow only one tow company to operate within these areas. This would cut down on ‘accident chasing’ and other dangerous practices.

She emphasized that extra tow companies will be allowed to operate within the tow zones but will require permits from the provincial police or the provincial government. The pilot project is expected to run for two years with the potential of a 12-month extension after that period. Mulroney asserted that the provincial government is also drafting laws to further regulate the vehicle towing sector, which could include licensing tow truck drivers.

Meanwhile, the provincial government is forming some kind of ‘joint forces operation’ team managed by the Ontario Provincial Police with the help of local police services to address criminal activities in the industry.

In May of 2020, the provincial police made about 19 arrests after realizing that towing companies were defrauding insurers and using property damage and violence to seize territory and control the towing industry. According to police reports, four drivers died as a result of the turf war, and about 30 trucks were burned.

The Ontario provincial government created a task force in June of 2020 to address these issues. The task force would later find that there was a ‘patch of requirements’ in the province and inadequate government oversight. Some of the task force’s recommendations included new legislation to offer oversight, restricted tow zones, a mandatory licence to operate a commercial tow truck and a reliable joint police task force to address criminal activities.

If You Were Injured As a Result of Car Accident With Tow-Truck, Call Grillo Today and We Can Help You

Our lawyers are experienced and renowned leaders in their areas of specialization. We also have access to highly experienced experts in the fields of medical practice. These experts have been helping victims of accidents and trauma for many years. Generally, our network of experts have been qualified by the Ontario Courts as reliable experts in their specific fields of practice. They will stand in your corner to help you fight against resourceful insurance companies.